It would be criminal not to write a post about how to take confetti pictures, considering all of the marketing pictures across all of my blogs and websites involve confetti!

I absolutely LOVE confetti and it looks amazing in photographs.

It does make a lot of mess and you will be finding bits of confetti for months, but it’s so worth it to have some colourful, fun pictures that grab attention.

This guide is based on taking the images of yourself but you can easily apply these tips when taking confetti photos of other people.

How To Take Confetti Pictures

There are SO MANY different kinds of confetti. Different shapes, colours, sizes, even the way the confetti is delivered.

For my first confetti pictures, I used a confetti cannon and wow I regret that. I was doing the photos indoors, as I really like a plain background for these kind of shoots and the cannon was so loud!

It made my ears ring and the expression on my face while it went off was ridiculous, so the key confetti moments had passed by the time I’d composed myself.

I decided after that to just scoop the confetti and throw it as it’s far more controlled.

Personally I like larger confetti pieces with pops of colour because they make a bigger impact, like the multi-colour confetti below.

Step #2 – The amount of confetti matters

You don’t want too little confetti because there won’t be enough.

You also don’t want too much because it will definitely get in the way of your face and absolutely everything else in the picture.

I’d recommend two big scoops in the palms of your hands, as that’s the amount that has always worked best for me but if you have a specific look in mind, it’s worth experimenting with the amount.

Related: How to take professional photos of yourself for your blog

In the same way that the amount of confetti matters, where it’s placed in the frame is equally important.

If you throw it upwards in the middle of the frame, your face is going to be covered and the confetti is not going to spread out as well.

A little tip, would be to use both hands apart either side of you and throw it really high so that when the confetti surrounds you, it’s slightly spaced out.

You should really capture the confetti with as little motion blur as possible, so that it still actually looks like confetti and not just some blurry bits of colour that you’ve splodged on the picture in Photoshop.

You can do this by using a fast shutter speed. To test what shutter speed is best for your particular set up, try taking some test shots with just one piece of confetti falling in front of the camera, then adjust to your liking.

Confetti falls REALLY FAST, which is why you need a fast shutter speed but there are also a couple of other things you can do to give yourself more time to capture the best possible confetti picture.

One thing you can try, is using a fan on the floor pointing upwards and on a low setting so that the confetti floats in the air for a bit longer.

You should also use the continuous drive mode or burst mode on your camera, so that you can take multiple pictures in quick succession.

I know these are tips on how to take confetti pictures but I am a perfectionist. So when it comes to confetti photos, there may be two or three images where I think to myself “I’d love a combination of these”.

Maybe you like the way the confetti is falling in one photo but prefer the way you look in another similar photo.

What I like to do here is layer the photos and create a layer mask in Photoshop to bring the confetti through. It’s MUCH easier to do this when you’re using a tripod (I recommend this Manfrotto Compact Advanced tripod), but if you’re taking these photos of yourself then that is given.

Here’s a quick guide on how to do layer masks in Photoshop.

Pick the confetti that will best suit your style. If you want images that pop, then you need large and colourful confetti. Don’t forget your tripod and keep your images sharp.

And if you’re using a confetti cannon, watch out for the bang!

Now that you know how to take confetti pictures like a pro, so there’s nothing stopping you from taking some fun, colourful images for your blog or business. 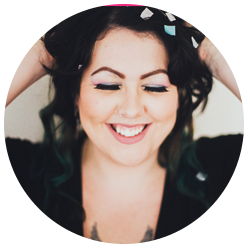 Hey, I’m Kelly Jean, photographer and blogger. Welcome to Clicks & Confetti, where I teach bloggers how to take beautiful photographs and photographers how to blog for business.

Access the free resource library for blogging and photography freebies